For Press assets for use with this story, please see this page

Filmmakers can now use their iPhones and iPads to track shots as they shoot, thanks to “ShotList”, a new app released today that puts a production strip board in your pocket for the first time.

Part-financed by Northern Film & Media and developed in co-operation with an award-winning video production company, ShotList places a professional-quality filmmaking tool in the hands of anyone putting together a movie or video shoot.

The new app brings the “Production Strip Board” system used for many years in the film industry to mobile devices for the first time, allowing the planning and tracking of every scene of a shoot as it happens. 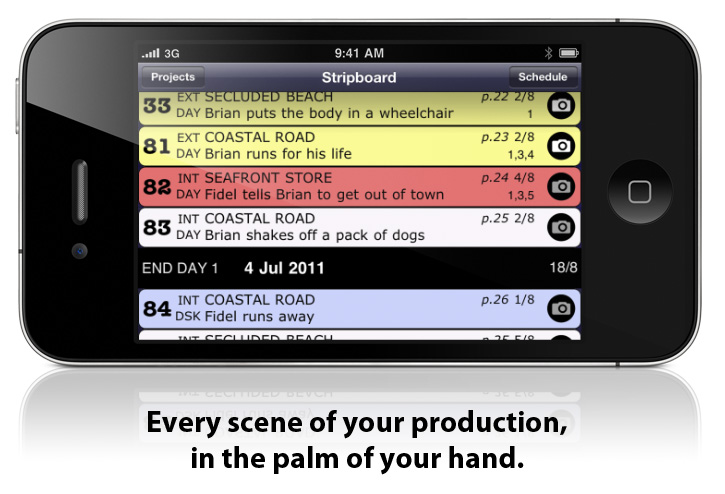 Filmmakers can enter as much or as little information into the app as they want. It could simply be a series of shot numbers and storyboard frames, or all of the detail which would usually be pulled from a script and entered into a production strip board system as part of the scheduling process. This powerful pocket-sized tool lets filmmakers react and respond quickly to on-the-day challenges, such as weather conditions or issues with locations or cast.

Additional features will be added, based on user feedback (which Soluble already have a great reputation for this, from their “MailShot” group email app.) The current roadmap for future development includes enhanced iPad support and iOS5 cloud sharing.

Peter Johnson, Founder Soluble Apps: “When a colleague went to start work as 1st AD on a feature, we were amazed to find that there was nothing at all available on the App Store like this. Shotlist is the first app to provide what every filmmaker needs to track a scripted shoot on the go.“

Please get in touch with us if you need a promo code for app review.

Soluble Applications is a development studio targeting mobile devices. The studio was founded in Newcastle Upon Tyne in 2010 by Peter Johnson, a games industry veteran with over 25 years’ experience as a Programmer, Producer and Studio Head working on computer and console titles for world-leading games publishers including 2K Games, Atari and Ubisoft.

Soluble’s main product to-date has been their unique group email solution, “MailShot”, the only app to build this feature right into the iPhone address book so it can be used directly from almost any other app.

Northern Film & Media (NFM) is a creative industry development agency based in Newcastle. Our vision is to create a strong commercial creative economy in the North East by commercialising talent and ideas.

Historically we have generated £4 for every £1 of public money we have invested.

NFM provides the link between talent, experts and the market, introducing the talent to the market and introducing the market to the talent. The independent agency invests in talented individuals and innovative companies, ensuring that creative enterprise succeeds in national, regional and international markets.

NFM takes an entrepreneurial rather than bureaucratic approach, drawing funding from a number of sources to deliver a high economic return for the North East. However, funding is only part of the picture. Because the agency is industry-led and agile, NFM uses seed investment, influence, leverage, industry expertise and partnership working to make an impact.

Northern Film & Media have become an efficient and dynamic entity for supporting creative industry development and have an industry board, including practitioners from film, television, games, web, mobile, games and music.