ShotList places an essential, professional-quality filmmaking tool in the hands of anyone putting together a scripted movie or video shoot, at an affordable price.

Developed in co-operation with an award-winning video production team, this unique app brings the “Production Stripboard” system used for many years in the film industry to a mobile device for the first time – allowing  the planning and real-time tracking of every scene of your shoot as it happens 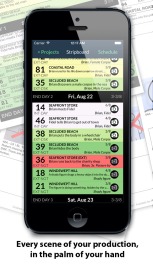 ShotList stores the details, locations and notes for each scene ready for instant recall. Use it to track progress throughout the day of a shoot, or to break down a script and plan out a multi-day shoot in advance – all “on the go”.

If inspiration strikes, or a last-minute disaster forces a rethink, you always have the latest version of your schedule right there with you and can change plans on the spot, and let others know about it.

Or for a more detailed wakthrough of the app’s capabilities…

You can discover more about what ShotList can do from our User Guide.

ShotList works with all iPhones (including iPhoneX) and iPads, iPad Pro and iPad Mini,  and iPod Touch running iOS9.0 and above, and is available now on the App Store.

56 thoughts on “ShotList- Scheduling And Tracking For Filmmakers”